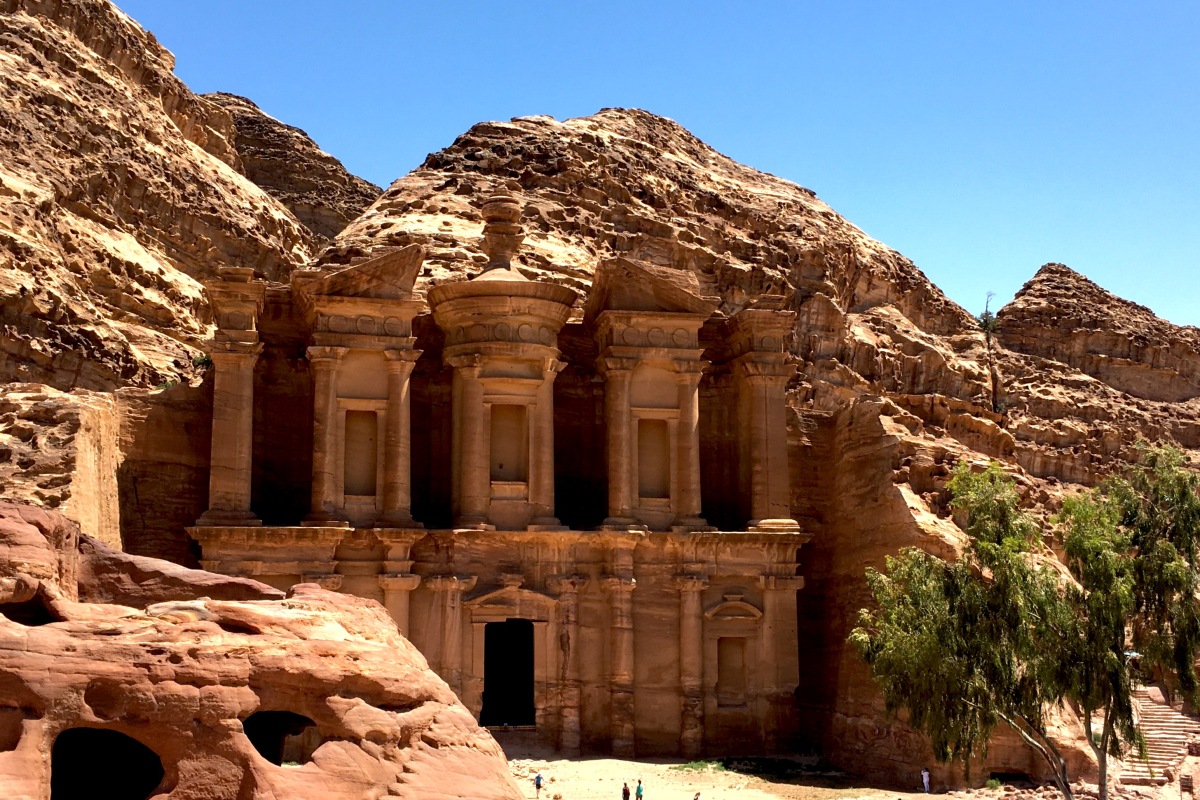 The ancient city of Petra in Jordan is famous for its architecture carved into sandstone cliffs as well as for its hidden location within the canyon landscape. Petra was established over 2000 years ago-as early as 312 B.C. Until 106 A.D., Petra was the capital of the Nabataean empire, but then soon became abandoned, and was not found again until 1812. In 2007, it was listed as one of the New Seven Wonders of the World. Travelers will need at least one full day to explore Petra, but many people spend two to three days exploring all the hidden gems of this lost city. The highlights of visiting Petra include viewing the famous Treasury (the famous scene from Indiana Jones and the Last Crusade) and hiking up to the Monastery (about 800 steps). Remember, this truly is a city- in one day, I hiked almost 10 miles and still only covered a part of it.

How to Get to Petra

The two main ways to get to Petra are through Amman, the capital city of Jordan, or from Israel, which neighbors Jordan to the west. Direct flights to Tel Aviv are operated by Delta and El Al airways. While I enjoy arranging all my travel independently, I would highly recommend using a tour company to visit Petra. We used Desert Eco Tours, and entered Jordan from Eilat in the south of Israel. It is also possible to cross from Israel to Jordan in the northern part of Israel, however, due to the unrest in neighboring Syria, it is not recommended. Desert Eco Tours coordinated our visit from Israel to Petra – this was seamless as they also arranged for our visa into Jordan, and booked our hotels and transportation within Jordan. Once you cross the Israeli-Jordanian border on foot, your Jordanian tour guide will be waiting to pick you up on the other side. As you walk from Israel to Jordan, you will see that in just a few hundred feet, the language, culture, and religion changes – it is quite an amazing experience.

Bring layered clothing. The Jordanian desert is cold and windy at night, and temperatures can be scorching hot during the day. Dress modestly – women should cover shoulders and knees – this will also prevent against the intense sun during the day. You will need good shoes as Petra is vast and the climb to the Monastery (a must see) is a strenuous 1 to 2 hour climb. Stay hydrated and arrive early as it is much cooler in the morning. If you are not in adequate physical health, buggies and donkeys are available to take tourists around Petra’s sites. The tour company will assist in time management, but allow yourself at least 2 to 3 hours to cross the Israeli-Jordanian border both ways.

Spring or late Fall is the best time to visit Petra. From March to April, the temperatures are pleasant and the crowds are mild. In general, due to unrest in the Middle East, tourism has declined in Jordan. We stayed in a Bedouin Camp the night before visiting Petra, and our group of 8 were the only guests. That being said, by taking appropriate and common sense precautions and following the advice of our tour guide, we did not feel unsafe, and truly had an amazing experience. Arrive early in the morning to visit the sites to avoid the intense midday heat.

The most well known site in Petra is The Treasury, which was made famous by the Indiana Jones Movie. In the movie, it seems that there is a passageway and several rooms beyond the facade. But, in reality, beyond the magnificent facade is just one empty room that was thought to be a tomb.

As you hike deeper into the lost city, be sure to make the one hour climb to the Monastery. It is an enduring hike, but well worth it.

As mentioned earlier, there are several hikes to explore all the small gems of this ancient hidden city, but the Treasury and the Monastery are the main highlights if you only have one full day in Petra (at least 6 to 7 hours). If you have more time, explore the scenic landscapes of Wadi Rum and spend a day on the Jordanian side of the Dead Sea.