Built between 1514 and 1520, the Belém Tower, commissioned by King John II, was part of Portugal’s defense system and a ceremonial gateway to Lisbon.  It is a UNESCO World Heritage Site, with a 100 foot 4 storey tower.  This tower is one of the main attractions in Belém, which is an area in the southwestern most part of Lisbon.  The historical area of Belém, which highlights Portugal’s Age of Discovery, is located where the Tagus River meets the sea.  The Belém Tower was thus used as a military outpost to protect against enemy and pirate attacks.  During the Peninsular War in the 1700s, where Napolean’s forces invaded Lisbon, French prisoners were kept in the dungeons of Belém Tower.  For several years, these dungeons served as a military prison.

BEST TIME OF YEAR TO VISIT:

May and September for pleasant weather that’s not too hot and to avoid the more crowded summer months.  Arrive at 10 am when it opens to avoid crowds.  The last admission is between 5 pm and 6 pm depending on the time of year, so if you plan to arrive late, check the timings for that time of year.  The monument is closed on Mondays, January 1st, Easter Sunday, May 1st, June 13th, and December 25th.

Comfortable shoes / flip flops to walk between the sites of Belém.

HOW TO GET TO Belém:

The easiest and fastest way is by taking a taxi or an Uber to Belém from the center of Lisbon.  The central part of Lisbon is well connected with trams and buses, but Belém is 6.5 miles from central Lisbon.  Once you reach Belém by car, the main sites here are walkable to one another.  After a long day of sightseeing here, it was nice to get back to the center of Lisbon quickly for dinner.  It’s a few well spent Euros, especially if traveling with another person to split the cost.

The cheapest way to get to Belém Tower, especially if you are traveling alone, is by public transport.  The number 15 tram connects the center of Lisbon to Belém.  The journey takes between 30 and 40 minutes each way depending on where in Lisbon you pick up the tram.  The best way to avoid crowds is to arrive Belém early in the morning and complete your touring by the early afternoon.   Board tram 15 at either at Figueira Square, Comercio Square, or Praça da Figueira in Baixa district of Lisbon (where the tram originates).  Get off at the Jeronimos Monastery in Belém and explore the main sites here on foot.  The best deal overall is to purchase a 24 hour public transport card that allows you to use all buses, trams, and the metro.

WHAT NOT TO MISS in Belém :

Belém Tower and the Jerónimos Monastery are the two most famous sites in Belém.  The monastery, which is another UNESCO World Heritage Site, is walking distance from Belém Tower and houses the tomb of Portugese explorer Vasco de Gama.

One street behind the monastery, on Rua de Belém, is the famous Pastéis de Belém pastry shop.  Pastéis de Belém is famous for its Portuguese egg tart – called Pastéis de Nata. They apparently have the best egg tart in all of Portugal, so when in Belém, be sure to stop here for a sweet pastry.

The Pena National Palace, a UNESCO World Heritage Site, sits on a hill above the town of Sintra.  In fact, on a clear day, it can be seen from the city of Lisbon, about 18 miles away.  Not sure what drugs King Ferdinand II and architect Wilhelm Ludwig von Eschwege were on, but the palace is known for its wild colors (purple, pink, red, yellow) and gothic/moorish / baroque architecture – basically all over the place. It was completed between 1847 and 1854 as a summer house for Portugal’s royal family.  It is thought that the architect for the Pena Palace was inspired by the Neuschwanstein Castle in Bavaria, Germany, however, construction for  Neuschwanstein did not begin until 1869, years after the Pena was completed.

The town of Sintra is about a 30 minute train ride from Lisbon and can be easily done as a day trip (leave early if you want to also visit the Moorish Castle and the National Palace in Sintra).  After arriving by train in Sintra, the Pena Palace can be reached by bus, which is a good idea on the way up as it is a steep climb.  On the way down, stroll through the Pena Park which is a forested area surrounding the palace. 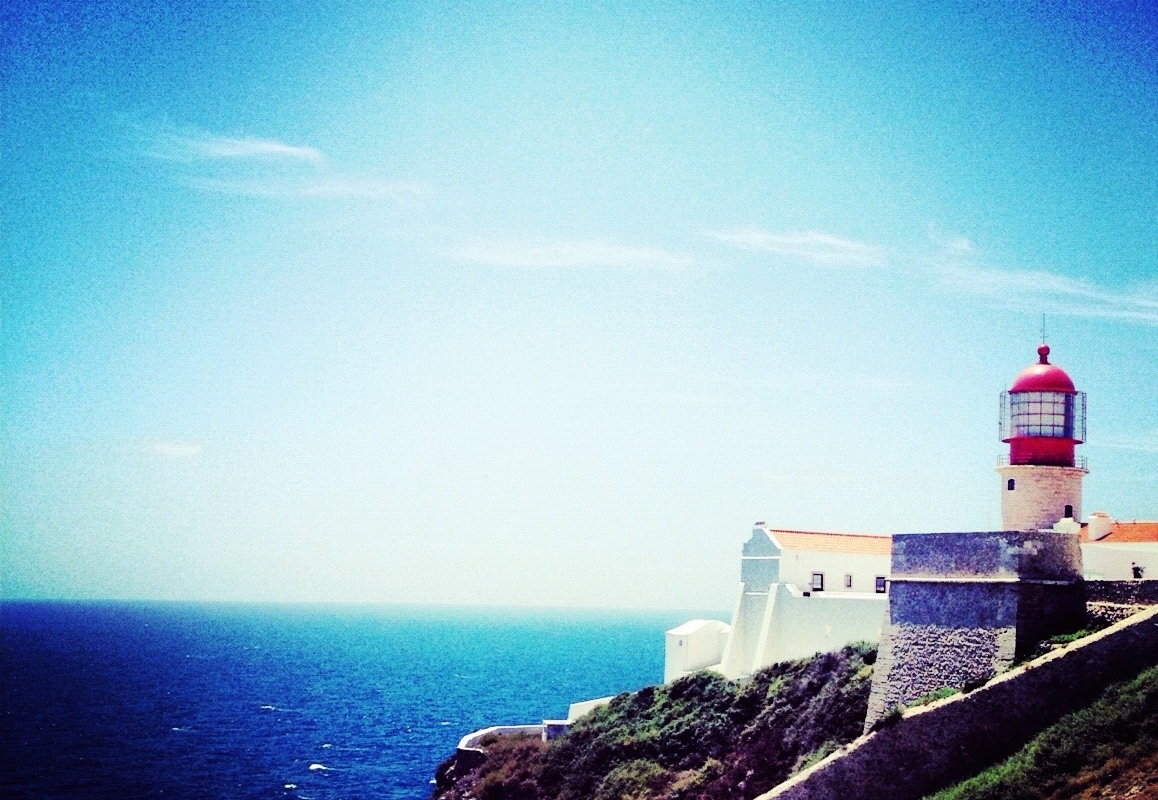 The southern coast of Portugal is well worth a visit.  Vacay-tioners can either fly into Lisbon and take a bus to Lagos, or fly directly into Faro in the south.  One of the most famous spots on the southern coast lies at the most southwestern tip of the country called Cape St. Vincent.  Cape St. Vincent is about 4 miles from the town of Sagres.  Sagres however is very quiet so it is better to visit it while vacationing in the charming and bustling beach town of Lagos.  To get to Lagos, you can either take a bus from Lisbon or fly into Faro and rent a car.  In order to reach Cape St. Vincent you must take a bus to the small town of Sagres (which is also a brand of Portugese beer) and then switch to a bus going to the Cape.  When it was thought that the world was flat, Cape St. Vincent was erroneously thought to be “the end of the world.”  The dramatic cliffs here are nearly 75 meters above the Atlantic and the sunsets are some of the world’s best!