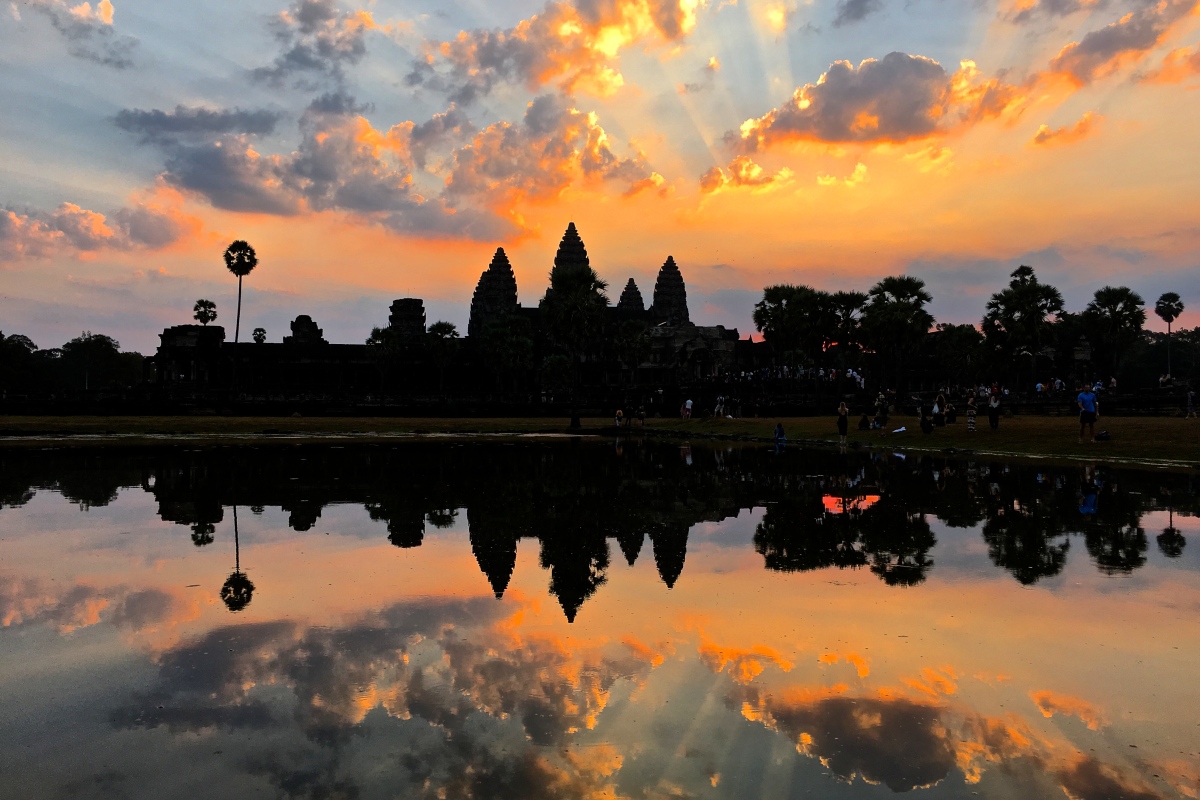 Originally built as a Hindu Temple by the Khmer Empire, Angkor Wat is the largest religious monument in the world. The complex measures a massive 401 acres (1,626,000,000 square meters) and was built to honor the Hindu deity Vishnu. Construction of some of the monuments here is thought to have begun as early as 900 AD and majority of the temple complex was built by Khmer King Suryavarman II between 1113–1150 AD. It was designed to resemble Mount Meru, which, in Hindu mythology, is the home to the Hindu deities.

Later in the 12th century, the temple gradually transformed into a Buddhist temple and Buddhist monks still visit Angkor Wat today. The Angkorian period lasted from 802 AD until the 14th century. The population in the city of Angkor was significant- it accounted for 0.1% of the world’s population in the 12th century. The massive abandonment of Angkor city which housed Angkor Wat, occurred when the Thai kingdom of Ayutthaya took Angkor in 1431. This led to a massive migration south and marked the end of the Khmer empire.

Angkor Wat was not discovered because it was never lost. The location and temples of Angkor have been described in history on several accounts following the fall of Angkor in the 1400s. However it was Henri Mouhot who popularized this world wonder. In 1858, Mouhot arrived in southeast Asia and spent the next three years exploring, until his death in Laos at the age of 35 from malaria. Little did he know that two years after his death, in 1863, the publication of his travel journal would immortalize him. In his journal, he described the massive lost city complex of Angkor and all its grand temples that had been consumed by the jungle. It is thought that Angkor Wat was largely preserved from this due to the large moat that surrounds the temple complex. The nearby Ta Prohm temple (the site of the Lara Croft: Tomb Raider movie filming) has trees that have grown into and out of the temple structures.

HOW TO GET TO ANGKOR WAT

Direct flights to Siem Reap (Siem Reap airport code: REP) can be found on local asian carries from several cities including Bangkok, Hong Kong, Shangai, and Guangzhou. From Siem Reap, Angkor Wat is a short drive away. Much of Siem Reap’s hotels cater towards travelers planning to visit the temples, so once you book a hotel in Siem Reap, you can arrange a tour through them as well. Flights are also available from Cambodia’s capital city Phnom Penh and the beach town of Sihanoukville, if you plan to visit Otres Beach after temple touring. Buses are also available to take in Cambodia, but flights are the fastest and most reliable option.

WHAT TO BRING / WEAR TO ANGKOR WAT

Although Cambodia’s weather can be very hot and humid, remember to cover knees and shoulders when visiting the temples. Given the thousands of visitors each day, you are unlikely to be stopped, but out of respect to the local monks, cover up appropriately. Make sure to bring a camera, bottled water, and buy your ticket ahead of time. If hiring a tour guide (highly recommended), they should be able to handle this for you. Bring cash to pay for food and souvenirs near the temple. Don’t forget to use insect repellant with deet while visiting Cambodia.

Cambodia’s monsoon season runs from late May to November. To avoid rain, plan travel around those months. For budget travelers, room rates (which are already low in Siem Reap) can be a real bargain during the rainy season. The most expensive time to travel to Cambodia is around the Christmas and New  Year holiday when hotel prices can be double and sometimes triple the normal rate. Plan in advance if traveling during the holiday as hotel rooms tend to fill up quickly. Leave early in the morning (at least one hour before sunrise) to get a good spot to view the sunrise.  Crowds around the holiday season are massive.

WHAT NOT TO MISS IN CAMBODIA

Both sunrise and sunset are beautiful at Angkor Wat. In the mornings, the sun will rise behind the temple causing a stunning reflection of the temple and clouds in the pool in front of Angkor Wat. For sunset, tethered hot air balloon rides cost only 20 USD and can give you an aerial view of the massive temple complex. In addition to Angkor Wat, be sure to visit the nearby Ta Prohm and Bayon temples. Ta Prohm is famous for massive tree roots that have grown into and around the temple structures. For a break from temple touring, take a direct flight from Siem Reap to Sihanoukville (airport code: KOS) to visit the peaceful Otres beach on Cambodia’s southwest shore. 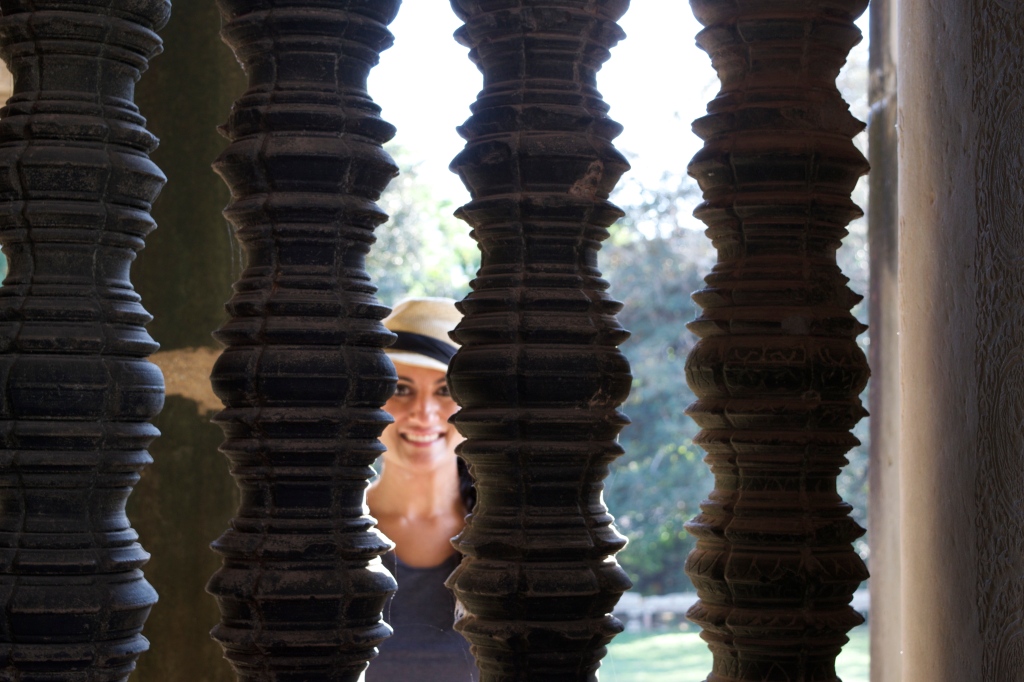 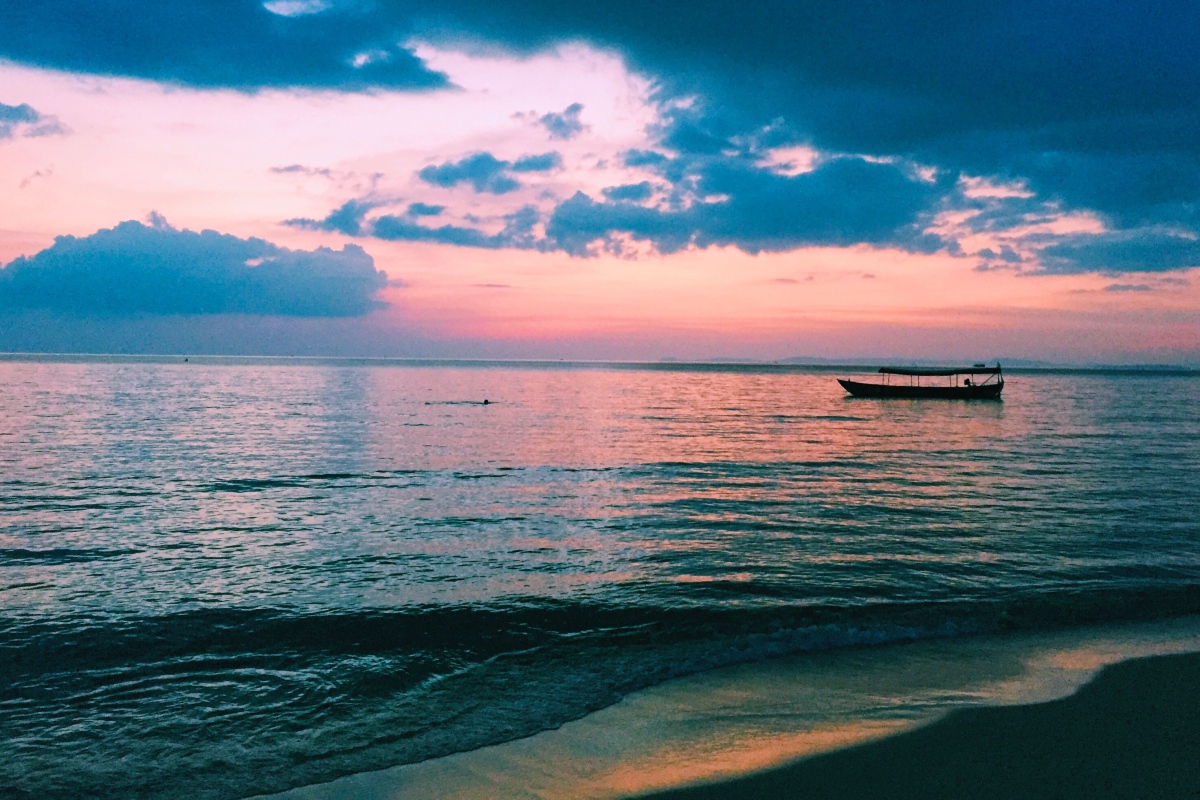 On Cambodia’s southwest coast lies serene Otres Beach- a hidden paradise that most people have never heard of, much less visited. With gentle waves, sandy beaches and lazy cafes, Otres is your typical countryside beach. It is tucked away from the busier party area surrounding Serendipity beach, which is closer to the town center of Sihanoukville. With its backpacker and hippie vibe, this beach is certainly on the road less traveled. This part of Cambodia is still relatively unknown. Travelers who are able to spend time exploring Cambodia beyond Angkor Wat will be happy they made the trip to Otres Beach. Dabbled with western tourists, it is not crowded-yet. The hot Cambodian climate lends itself to beach lounging, yoga, drinking cheap Angkor beer and perhaps a little paddle boarding- if you are up for it. The sunsets on Otres are particularly amazing, so be sure to have your camera ready. 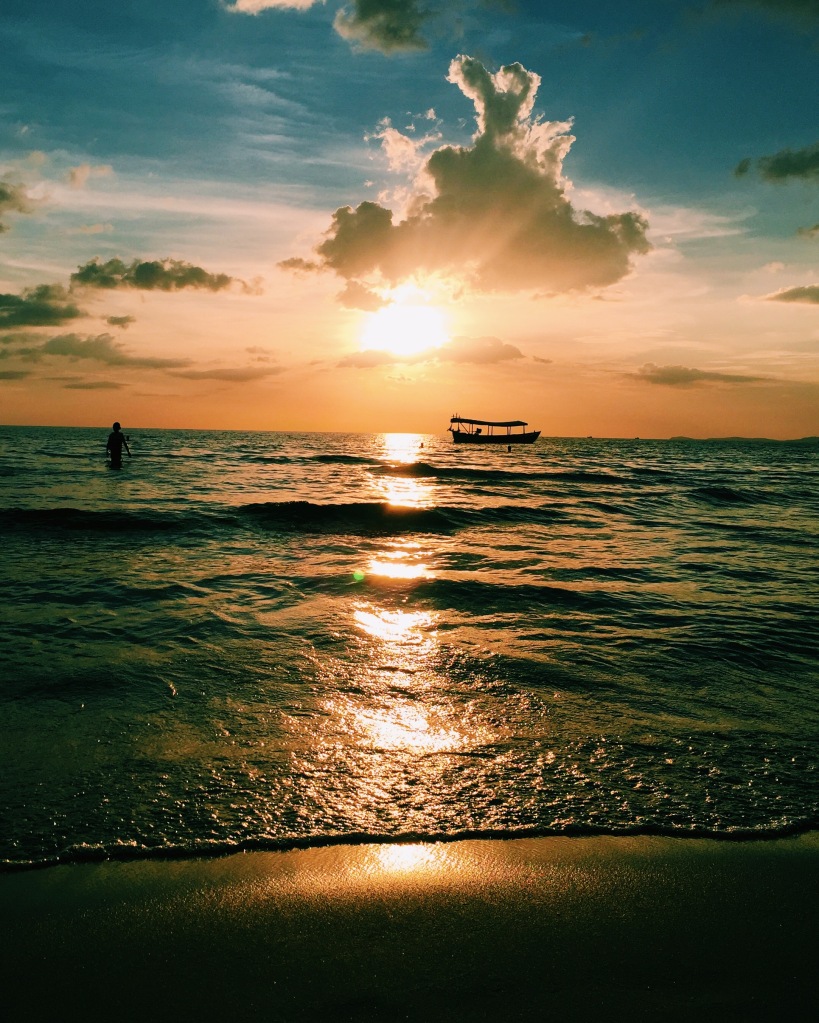 The good thing is, for most western travelers, Cambodia is very budget friendly. On Otres beach, travelers can treat themselves to inexpensive pedicures, manicures and massages for a few dollars. To feast at a fraction of western prices, buy grilled calamari or fresh mango from a Khmer woman selling food on the beach. Luckily, the local vendors are respectful, keeping the atmosphere calm. This region of the ocean is also scattered with small beautiful islands that are an hour’s boat ride away from the mainland. In fact, you can see two of biggest islands, Koh Rong and Koh Rong Samloem from the shore. Travelers can explore these islands by reserving an island “cruise” from one of the beach travel vendors.

How to get to Otres Beach:

The nearest town is Sihanoukville, which has an airport. If visiting Angkor Wat (a must!) during your time in Cambodia, the easiest way is to take a flight from Siem Reap. The cheapest way to get to Otres Beach is by bus. Buses run from both Phnom Penh and Siem Reap. Taking about 4 hours from Phnom Penh and 10 hours from Siem Reap, the bus will drop you off at the town center. From there, take a 15 minute, 5 USD tuk tuk ride to get to Otres Beach.

What to bring to Cambodia:

Bring beach wear for Otres beach, sunscreen, and insect repellant. Luckily, if you can’t carry it with you due to airline liquid regulations, insect repellant can be cheaply purchased in Cambodia.

Best time of the year to visit Cambodia:

Because Cambodia has a warm to hot climate year around, Otres Beach is always a good place to relax. However, the monsoon season runs from late May to November. To avoid rain, plan travel around those months. For budget travelers, room rates (which are already low for western travelers) can be a real bargain during the rainy season.

What not to miss in Cambodia:

Leave Otres for a day to explore one of the islands. They are great for snorkeling, swimming and hiking. The island cruises are usually day trips leaving from the port in the town center. Those to really wish to get away from it all may choose to stay overnight at Koh Rong or Koh Rong Samloem. Of course, while in Cambodia, no visit is complete with a visit to Siem Reap and Angkor Wat. The temples in and around Angkor Wat are not to be missed when visiting this fantastic country. Cheap flights to Siem Reap can be found on local Asian carriers. Be sure to get to Otres Beach before everyone else does!